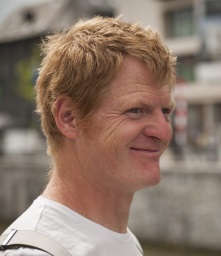 Oliver Zimmermann was born in Frankfurt/Main Germany (5.3.1970) and grew up there. He went to the Steinerschool where he could make his first experiences in arts and technics. After his graduation and civil service he went to Brussels to the Circusschool (école sans filet, today ESAC) to learn to walk on the wire. After two years of training he started to make his first professional experiences. He started to teach tightrope walking.

During three years he worked with Cie. Catastrophe continued learning and played in serveral Circus-theater shows. 1998 he continued his road to Paris to go to the Circusshool Fratellini for two more years to train on the tightrope. At the same time he worked to become a Highwire walker. He started to do shows as a highwire walker in Germany, Belgium and France. He joined the Cie. „Les treteaux du Coeur volant“ and worked all over Europe during five years.

In 2006 he continued allone with highwire walks in Europe, with Clowns without Borders as a tightropewalker in Jordan, at the worldchampionship of highwirewalkers in Seoul Corea and as artist and teacher at the Circusschool in Battambang/Cambodia. He worked with Circus Marcel in Belgium for different shows as artist and technician. Three years he did the highwire in Altlenburg/Germany at the Prinzenraub festival. He did professional training in steelwork, welding and carpenters work.

Today he is working where ever he can, produces Circus specific Matirial and works in big hight and places on difficult acces.

These people had a profound influence on his work: